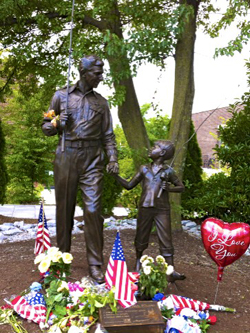 North Carolina icon Andy Griffith died Tuesday morning, July 3, 2012, at age 86 at his home in Manteo, NC. Griffith was best known for his self-titled television show that ran from 1960-1968.

The sitcom is based in the sleepy town of Mayberry, believed to be modeled after Griffith’s home town of Mount Airy, North Carolina, just a half hour drive from Winston-Salem. The show’s down-home wisdom, quirky characters, and earnestness has charmed audiences for generations as reruns continue to air to this day. The sitcom’s influence was so powerful that the term “Mayberry” has become a synonym for any small community that demonstrates innocent homespun values.

Andy Griffith’s Legacy for His Hometown

Many from Mount Airy claim that Andy Griffith put the town “on the map” and it still enjoys a vibrant tourist trade thanks to the show. Tour buses roll in regularly for guided tours highlighting:

Each year the town host the popular “Mayberry Days” festival which has had guest appearances from various actors from the show over the years. Actress Betty Lynn, who played Barney’s love interest on the show, felt so welcome there that she relocated to Mount Airy several years ago.

To Many, Andy Griffith IS Mount Airy

For me (the author), as one who was born and raised in Mount Airy, Sheriff Andrew “Andy” Jackson Taylor was like a grandfather figure. He was of my grandfathers’ generation, from my hometown; he had the same Southern drawl and held the same homespun values I saw every day in the people around me. Although he didn’t visit our town for many years, despite our collective love for him and outreach, prodigal sons are always forgiven.

Griffith played the straight-man to Knott’s lovable, naive, twitchy Barney role. “What are the state police gonna think when they get here and find we got an empty jail?” shouts Barney in one episode. “They’re gonna think this is just a hick town where nothing ever happens!”

“Well, now,” “you got to admit that’s about the size of it,” says Taylor, calmly.

Andy Griffith and the strong values of his character Andy Taylor are legendary in these parts and around the world. “I guess you could say I created Andy Taylor. Andy Taylor’s the best part of my mind. The best part of me,” Griffith stated in an Associated Press interview in 2007.

More than just a small-town sheriff

Later in Griffith’s career his other successful projects included his starring role as attorney Ben Matlock in the show Matlock, that ran from 1986 to 1995, for which he was also writer, director and producer. This lighthearted, fatherly, Southern-bred and Harvard educated character seemed almost like an older Andy Taylor.

In 1997, Griffith won a Grammy for his album of gospel hymns, “I Love to Tell the Story,” which harkened back to his days of singing as a boy at Grace Moravian Church.

In a statement earlier this week, North Carolina Governor, Bev Perdue said the state “has lost its favorite son.” And for those of us in Mayberry, so much more.