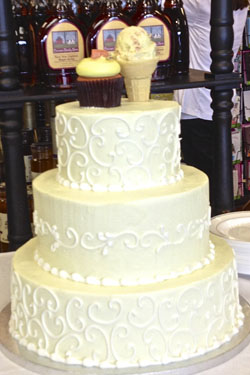 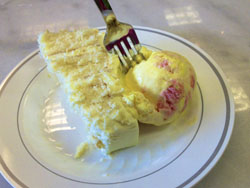 As in the past, Blue Ridge Ice Creams will be serving about 20 flavors each day on a rotating basis in the new location. The newest outcome of the union is Pink Lemonade ice cream, complete with chunks of Dewey’s famous pink lemonade cake and frosting. Other flavors that will be served include Dewey’s Moravian Spice Cookie ice cream and Dewey’s Moravian Sugar Cookie ice cream, Dulce de Leche and Tupelo Honey gelato, among others. 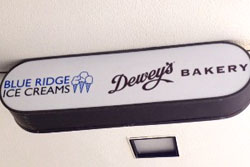 The announcement of the union coincided with the remodel of Dewey’s Bakery store at the Thruway location. The remodel created increased space for a refrigerated case of offerings like cheesecakes and ice cream cakes, as well as allowing for additional in-store seating, which includes eight tables.

Since Dewey’s Bakery opened in 1930, it has been baking local traditional favorites such as Moravian Sugar Cake, Grandma and Grandpa Coffee Cakes, and Moravian Lovefeast Buns. It was the area’s first all-electric Bakery and focused on treasured Moravian baked goods. Dewey’s has continued to make favorites over the years, including its popular Moravian spice cookies and pink lemonade cake.