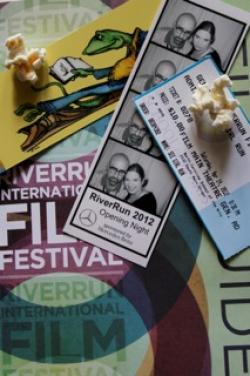 As mentioned in my earlier post, I attended the Opening Night Party for RiverRun International Film Festival Friday night, April 14, 2012. Lots of walking around, looking at faces, wondering who’s who and many of them were looking back at me, wondering the same thing. A dear staffer gave me the skinny on badge-reading: white lanyard/square badge (like mine) = sponsor, volunteer or press; while black lanyard, rectangle badge = event staff, director, actor, juror, or otherwise involved with a film or panel. That helped me negotiate the crowd with my lens.White lanyards, move on. Group of black lanyards, snap away and sort them out later.

The Story Behind See Girl Run

My goal for the evening was to talk to Nate Meyer, writer/director of See Girl Run. Now a resident of Brooklyn, NY, Meyer is a Greensboro native and graduated from the University of North Carolina School of the Arts (UNCSA) film school in 1998, the second year of the program.

See Girl Run has a star-studded cast, including Robin Tunney (The Mentalist) and Adam Scott (Parks and Recreation, Party Down). I squeezed into one of the last remaining seats in the theater to see it for myself. Tunney’s character, Emmie, is disenchanted with her marriage and heads back home to consider exploring the “what if” possibilities with her high school sweetheart, Jason, played by Scott. Jason is an artist, a frog artist to be exact, and a good one, reminiscent of the Frog and Toad children’s books of our youth. (Jason’s art in the movie is actually by Josh Taylor of Chapel Hill, NC: joshtaylorart.com.)

In the Q&A after the screening, Meyer explained that he loves romance movies, when they are done well, and while this story is not autobiographical, it is something many of his friends have dealt with in some form or another. The film explores generations of romantic relationships and how they change and differ from our expectations of romance. One of the seven major themes of film is infidelity. Meyers thought it would be interesting to write a movie instead about fidelity, but not at all in a puritanical way.

The script is well written, with natural dialogue. My favorite character is Emmie’s brother, Brandon, brilliantly played by Jeremy Strong. His own life in shambles, he is a sage whose words cut quickly to the truth of Emmie’s situation that helps her choose the imperfect love she has rather than the fantasy of a love that would most likely disappoint in the end. **End of Spoilers**

Although some may find it a little slow-moving because of the lack of action, the dialogue is superb and natural. The film will resonate with many. In our age of social media, reconnecting with an old flame is just a click away and is a common occurrence when existing relationships fall short of our expectations. “Especially our generation,” says Meyer, “We are fed that life and love should look like the movies, and when it doesn’t make you happy, you should leave and go find something or someone that makes you feel better.”

RiverRun is a Well-Run Film Festival

See Girl Run is now making the film festival circuit. In fact, it was playing at the Orlando Film Festival at the very same time as the RiverRun screening, and Meyer was told it was sold out as well. Meyer said not all film festivals are created equal: “RiverRun is well-run. The event is organized, the staff is great to work with and you can tell that they really understand and enjoy film,” said Meyer. There is another sold out showing of See Girl Run at RiverRun today. Look for even greater things to come from Meyer.

See Girl Run will be released nationwide April 26, 2013. Get it On Demand/VOD (through your cable provider) and on iTunes, Hulu Plus, Amazon Instant, Blockbuster-on-Demand, etc.