Approximately 800 acres of Pilot Mountain State Park have been burned so far in what was originally a controlled, or “prescribed” burn that began Thursday morning. The prescribed burn was intended to burn only 180 acres. Embers from the fire “jumped the line” and quickly grew out of control. First photo taken Saturday, November 10, 2012, courtesy of Joe Morris.

Update 11/12/12: There will be a community meeting at 7PM tonight, (Monday) at Pinnacle View Baptist Church in Shoals, NC  for the public to ask questions about the fire.

Updated photo 11/11/12: Second photo taken from same viewpoint today, November 11, 2012, just 22 hours after the first photo. Also courtesy of Joe Morris. According to WXII News 12, as of Sunday morning, the wildfire is 70 percent contained and if the weather cooperates, they will soon have the fire encircled, though there may be a total burn of approximately 1,000 acres. Crews are expected to remain on site through midweek in containment efforts.

No Blame, No Injuries

Officials say that the prescribed burn met all safety requirements and no one was negligent in causing the resulting wildfire. No one has been injured in the fire thus far, though nearby residents are concerned about breathing in so much smoke.

For live updates and hundreds of locals’ photos of the fire, visit www.wxii12.com. 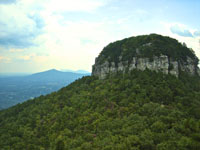 Approximately 15 minutes from the city of Winston-Salem, Pilot Mountain is a quartzite peak in Surry County, North Carolina, rising 2,421 feet above sea level. Pilot Mountain is believed to be the inspiration for the fictional “Mount Pilot” near “Mayberry” of the Andy Griffith Show. It is one of the most distinctive natural landmarks in the state of North Carolina. The two prominent points on Pilot Mountain are the Big Pinnacle (a.k.a., “Pilot Knob”) and the Little Pinnacle. Pictured (right) shows the Big Pinnacle of Pilot Mountain with Sauratown Mountain and Hanging Rock in the background.The state park in which it is located contains a campground, picnic area, hiking and horse trails. There is no damage assessment yet from officials indicating if those areas have been damaged by the fire.