Ever wondered about the history of some of the buildings in downtown Winston-Salem? There’s lots of history there, and many stories to be told, but we’d be writing a book if we told you them all. Instead, here’s some interesting facts to tickle your curiosity. Want to learn more? Search the site for more articles. More are added every week. 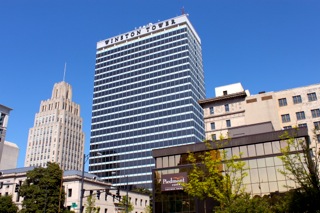 If you go on the Winston-Salem Scavenger Hunt you can learn about all these places and more. Scavenge across the city searching for clues as you learn about Winston’s past and travel through time to places and times from the days of old. The Scavenger hunt will be in its third season this year, and will most likely take place in the Spring (as the first one, which took place in the summer, proved a tad toasty). Stay tuned to We Love Winston for details, coming soon.

About The Author: Alex Schenker

Alex has lived in Winston-Salem since 2004. He has seen the city grow up from a time when almost no one gathered downtown, to today's thriving and bustling city with great selections of restaurants, events, concerts, and more. He's proud to be part of the Arts and Innovation movement.

When he's not sipping a draft at Foothills brewery, chowing down on a tomato pie at Mozelle's for lunch, or dancing to bluegrass at the Ramkat, you'll catch him hitting balls at Miller Park, or hiking Pilot Mountain with his wife and two pups.

Who owned the College Grill on Claremont Ave back in the day when it was very popular with Winston-Salem Teachers College students?

See our blog for the story of the fire and the 42 mules buried near the NC School of the Arts and some information about the Powell Paving Company: https://northcarolinaroom.wordpress.com/2015/04/27/the-sunnyside-mule-graveyard/

Thanks Fam for the great story!!

What was the former name of Martin Luther King Jr. Boulevard?

My dad was born in Winston-Salem.  His father had a small grocery store in the 40's (Charlie Walser).  I plan to visit the city soon and would like to know where the store was located.  Is there any information available?

Do you have any other information about the store? Perhaps the name of it? The street or neighborhood it might have been in? It may require a trip to the NC Room in our Central Library, located at 660 W. Fifth Street, Winston-Salem. It's a wonderful room full of local history, maps, genealogy, etc., with very knowledgeable and helpful staff. If not there, then search nearby at the Winston-Salem Journal/Sentinel archives on 418 N. Marshall Street, Winston-Salem, by your grandfather's name. Good luck and enjoy your visit to Winston-Salem!

According to this historical map, the north-south part of Martin Luther King, Jr. Dr. used to be Claremont, while the east-west part was Ninth Street. The two did not link originally.

Have you checked out the new Treks in the City app for iPhone and Android? It is a great FREE downtown virtual tour guide with lots of great recommendations and information on the various spots to visit. It was created in conjunction with Scene in Winston-Salem Scavenger Hunt and includes as a bonus all of the Scavenger Hunt locations and their historical significance for each year of the Hunt! Download it for free and you will love it.

Winston (and Salem) have such a broad and significant history. I wish the downtown area had some more monuments or artistic elements to help tourists and visitors see just how much interesting history there is to this lovely little place.

I lived in Charlotte, NC, for several years prior to moving to Winston Salem and have been blown away from the differences that an hour and 15 minute drive can make! While Charlotte somehow has virtually missed all historical moments in our country’s history, including the Civil War (how?!?), Winston-Salem was founded as a Moravian settlement by the Germans in the area that you can visit today of Old Salem. It is a living history “museum” that you can walk through any day of the week for a step back in time and a great taste of real history of the town. There is also Bethabra Park, many colleges with Wake Forest, Winston-Salem State, Salem College and even the UNC School of the Arts. Culture and history abound in WS! Then there is all the manufacturing history of Hanes, Reynolds and more. Moving to Winston Salem was one of the best decisions I have ever made and I hope everyone enjoys it as much as I do!

We did some research, and unfortunately weren’t able to find all that much, but here’s what we found:

SIDEWALK IMPROVEMENTS
February 18, 1927- During the period from 1920-1930, it was the policy of the Board to order the construction of concrete sidewalks on streets following the installation of curbing and the paving of the streets. On Feb 18, the Board ordered sidewalks on both sides of 13 streets and on only one side of 10 streets. The entire cost of the sidewalk improvements was assessed against the abutting property owners. (18-346)

The only other thing we found is a link to http://www.jstor.org/stable/1116560 with the following description:

I would suggest going to a local or state library and searching their archives, as it appears the existence of Powell Paving Co. dates back quite a bit (to the early 1900’s).

My mother is trying to find some information about this company.

She remembers this company when she was a little girl and said that she remembers it burning down, but she can’t find any information on this or anyone who may remember it. She’s 87 but said this was a family owned company. The streets were made of pavement and this company did it. Can you help and this was between 1920 and 1930.