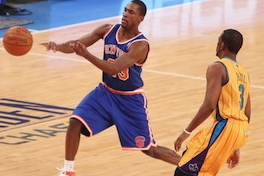 Christopher Emmanuel Paul is a professional NBA basketball player from Winston-Salem, NC. He is currently the NBA All-Star point guard for the Los Angeles Clippers and also serves as one of the vice presidents of the National Basketball Players Association.

Chris Paul was born in Lewisville, NC in 1985. He and his older brother, C.J., were coached by their father, Charles Paul, on local basketball and football teams growing up. After playing only two varsity seasons of basketball at West Forsyth High School in Clemmons, Chris was chosen as a McDonald’s All-American player.

Chris Paul was given a scholarship to attend Wake Forest University, where he helped lead them to 48 wins in two seasons, two NCAA Tournament berths and one Sweet Sixteen appearance. He played at Wake Forest until his sophomore year, finishing his career there with just under 1,000 career points. Chris Paul’s Wake Forest University career three-point percentage (.469) is the second highest in Wake Forest history.

After his sophomore season at Wake Forest University, Chris declared for the draft. He was selected as 4th overall in the 2005 draft by the New Orleans Hornets (formerly the Charlotte Hornets). In 2006, he was NBA Rookie of the Year, has been a five-time All-Star, and has been an All-NBA and All-Defensive team honoree many times. While on the United States national basketball team, he won an Olympic bronze medal in 2006, and two Olympic gold medals in 2008 and 2012.

Paul also shows prowess in bowling and is an official spokesperson for the United States Bowling Congress. As the head of the charitable organization, CP3 Foundation, he has bowled in many celebrity bowling events and youth bowling events, benefiting Hurricane Katrina victims.

Chris is the son of Charles and Robin Paul. His older brother, C.J., played basketball at Hampton University and USC-Spartanburg, and is now Chris’s manager. Chris married his college sweetheart, Jada Crawley in 2011. Their first child, Christopher Emmanuel Paul II, was born in 2009. The couple just celebrated the birth of their second child, Camryn Alexis Paul, in August of 2012.

In 2005, Chris began his philanthropic organization, CP3, to give back to the Winston-Salem community. Under CP3, he and his brother have refurbished the basketball courts at the Rupert Bell Recreation Center, and established an AAU basketball program in Winston-Salem called the “CP3 All-Stars”. In the last three years the organization has raised over $300,000 for local charities in Winston-Salem and New Orleans, and for the Nathaniel Jones Scholarship Fund at Wake Forest University and West Forsyth High School in memory of his late grandfather who was tragically killed in 2002.

During his most recent visit to Winston-Salem in December, 2012, Chris Paul teamed up with Josh Howard, of the Minnesota Timberwolves, giving $100 Toys R Us gift cards to 100 children from the Salvation Army Boys & Girls Club, Winston-Salem Parks & Recreation Department and Forest Park Elementary School.

The 2013 CP3 Youth Camp will be held at the Southeast Gateway YWCA in Winston-Salem, August 7-9, 2013. The camp teaches fundamentals by offering lectures, basketball drill stations, player evaluations, games, and basketball contests. Sign up now at www.cp3camps.com