Perhaps it’s the Food Network show The Great Food Truck Race, paired with childhood memories of the sound of the ice cream truck, that has spurred the growing interest in food trucks nationwide. Whatever the reason, this is one rash outbreak that we’re thrilled is spreading here in Winston-Salem.

There are several steady locations where you can find many food trucks, including food truck pioneer, Krankie’s Airstream on Reynolda Road, which hosts trucks every Wednesday and Saturday at lunchtime; Downtown Winston-Salem Food Truck Fridays from 6-9pm at the corner of Fourth Street and Broad Street, Bailey Park for special events, and the wildly popular Burke Street Food Truck Festival (see below). Which food trucks are your favorites? (There can’t be just one!)

This video features many of our local food trucks and mobile chefs. Check it out: 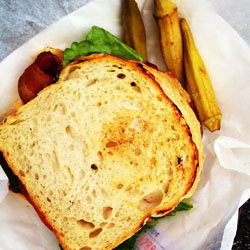 Camel City Grill food truck made its debut at the Burke Street Food Truck Festival in April 2013. Owner Ben Devar has been serving up interesting angus beef burgers and sandwich favorites ever since, including their Ben’s Pimento Cheese Burger, made with local Uncle Chris’ pimento cheese, the PBBJ Burger with pepper jelly, bacon and homemade peanut butter;  and their newest addition, the Hangover Burger. Definitely give the fried okra a try. Find them set up around town at locations like Krankie’s Airstream, Old Winston SocialClub, Milton Rhodes Center for the Arts and near Dash games. Follow them on Facebook and Twitter to find out their daily location.

This truck is all over town with BIG gourmet burgers and dogs, like their Dirty South Burger with collards, bacon jam and white sauce, and interesting pumpkin spice cream cheese burger! Find them often at Downtown Winston-Salem Food Truck Fridays at the corner of Fourth and Broad, Jugg Heads Growlers, and other locations! Check the Food Freaks of NC Facebook page for their schedule.

The Ice Queen is a mobile ice cream parlor from Greensboro that frequents Winston-Salem events. Choose from classics like the Rocket Pop or a cone of one of eight flavors of Edy’s ice creams, but we recommend her ice cream sandwiches. Pictured here is The Elvis: banana pudding ice cream and Reese’s peanut butter ice cream between two chocolate chip cookies!

Another favorite, King-Queen Haitian Cuisine boasts the best sellers: seasoned fried pork and poulet frite, as well as jerk chicken, fried plantains, and more. Find them often at Downtown Winston-Salem Food Truck Fridays on the lot at the corner of Fourth Street and Broad.

Italian ices made locally (in Kernersville) with real fruit and fruit juices. We especially love mango, watermelon and rainbow! Find this Italian ice truck often at Krankie’s Airstream and check their Facebook page for locations. Several yummy flavors and generous portions for the price!

Bandito Bodega out of Greensboro is a frequent visitor of Winston-Salem and we love their chicken tacos, Korean barbecue burritos and nachos.

Taqueria El Azteca is another Greensboro taco truck that frequents Winston-Salem, lauded for their fresh guacamole and more.

For something different, this Greensboro food truck often brings its popular Korean barbecue to Winston-Salem. Another favorite is the Ginger Chicken Bowl.

A newcomer to the local food truck scene is Village Juice Company, where the locally cold-pressed juice is the food! Their green juices are particularly popular. Find them often at Krankies Airstream and Cobblestone Farmers Market on Saturdays in season.

The inaugural Burke Street Food Truck Festival in April of 2013 was such a success, that it has grown by leaps and bounds!

While the first BSFTF three years ago boasted 13 food trucks and drew a crowd of 3,000, in only three years, it grew to more than 30 food trucks and a crowd of 12,000 to 15,000. This growth has included the Festival’s footprint, which now encompasses all of Burke Street and bleeds out into the side streets with four stages for music and a kids play area. Food trucks came from around the Piedmont and brought amazing food that included creole dishes, Caribbean, tacos, turkey legs, crepes, burgers, noodles, barbecue, cupcakes, ice cream, barbecue and more.

Restaurants on Burke Street and nearby did not complain, as they enjoyed the overflow diners from the Festival.

The event was organized by caring (unpaid) citizens Susan Morris, Reggie Delahanty. The two simply love food trucks and the downtown scene, and they wanted to bring some notoriety to the Burke Street area businesses.

Let us know in the comments and we’ll get it added asap!

When seeking Winston-Salem restaurants, you can find examples of almost all the large chains, from steakhouses to international fare to fast-food burger and fries. But if you are willing to get away from the city’s main retail areas, you can find a good range of food choices at moderate prices. There is plenty of traditional American fare from dirt-cheap to surprisingly expensive; southern and comfort food restaurants from cafeteria style to white-table cloth establishments; and a heavy dose of diners. Farm-to-table restaurants that buy local fresh produce from area farms (many organic) are on the rise.

Read our restaurant guide for an alphabetical listing of Winston-Salem restaurants. 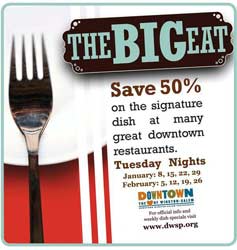